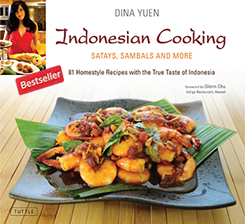 Indonesian Cooking is Chef Dina Yuen’s culinary exploration of the world’s largest and most diverse archipelago—the fabled Spice Islands of Indonesia. This is a vibrant, multi-layered nation with a fabulous and largely unexplored cuisine—and her easy-to-follow recipes now make them accessible to everyone. 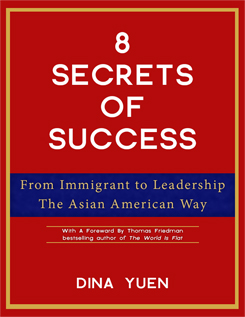 8 Secrets of Success: From Immigrant to Leadership The Asian American Way explores the journeys of some of America’s most successful and famous Asians, threading their inspiring stories together through the common cultural habits they share that ultimately led to their success. From wildly popular comedian Margaret Cho to bestselling violinist Sarah Chang to Master Chef’s Vikas Khanna, Dina Yuen details key aspects of their lives to demonstrate that there are eight common traits held within the Asian American community that ensure a high probability of success.

These eight traits vary from traditions kept hushed from one generation to the next, to characteristics popularly satirized in modern day memes. All of them however, hold secret stories of tragic episodes, violence, emotional scarring, loyalty and love- together weaving a jarring look into the lives of these Asian American public figures. 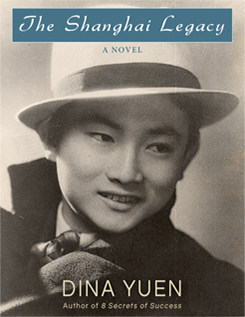 The Shanghai Legacy is based loosely on the true story of Dina’s great-great grandmother and is classified as a historical fiction due to the inability to verify certain facts.

A young woman creates a life she was not allowed to have… In mid-nineteenth century China, Lee Ying lives as the daughter of a prominent merchant family in Shanghai. Surviving a childhood wrought with physical and emotional abuse, Ying grows up to reject the life that her family has planned for her, believing she is destined for greater things. Through her Shaolin masters, Ying proves her talents and skills in martial arts to be far superior to those of most men around her. She is soon reunited with a long lost childhood friend, Lee Yok Fei, who is one of the last remaining descendents of the royal Ming family, masquerading as a high ranking official in the Qing Empire.

The Shaolin masters and Lee Yok Fei recruit Ying to become leader of the rebel group, the White Lotus Sect. Ying’s passion and dedication towards overthrowing the Qing Empire and restoring the former glory of her homeland drives her to become one of history’s greatest martial artists and leaders. She is forced to enter a masquerade of her own, disguising herself as a man while leading the White Lotus Sect in various rebellions and massacres of foreign officials stationed in Shanghai. As Ying’s life begins to splinter with the various roles she must play to satisfy familial obligations, her masters’ hopes and her own dreams, she meets Alexei Urmanov, a Russian captain. They begin a love affair that unleashes both their passions and desires in the most forbidden of ways, a love affair that would change the course of history for generations to come. 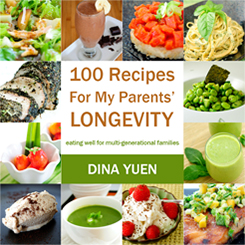 Being incredibly close to her parents, Dina has grown an obsession with making sure that her parents are eating as the most healthful, flavorful and balanced foods possible. Knowing what each of her parent’s primary health concerns are and their individual palates, she set out to create 100 Recipes that would allow them to eat for great health without sacrificing pungent flavors and bold textures.

100 Recipes For My Parents’ Longevity brings together Dina’s years of experience with Asian and Western techniques, ingredients and flavors, to create foods and drinks that are both delicious and nutritious, and most importantly, allow her parents to eat for their good health in a realistic and balanced manner.